Debt Figures Show Stirring of Recovery in the American Economy

According to data compiled by the Federal Reserve Bank of New York’s Research and Statistics Group, published in August 2011, consumer debt in the U.S. stood at $11.4 trillion, a drop of $1.08 trillion, or 8.6%, from the peak level at the end of the third quarter of 2008.

During the second quarter of 2011:

Non-real-estate indebtedness in the nation was $2.28 trillion, which is 9.5% under the peak recorded in the fourth quarter of 2008.

However, late in the year, during the traditional holiday buying season, families took on more debt than they had at any point during the last 3.5 years. This decision was apparently bolstered by better after-tax incomes that allowed some belt-loosening in Americans spending patterns. The increased spending also illustrated the weariness of the society as a whole with the discipline of saving money and reducing debt after decades of prosperity driven, and often unchecked, consumerism.

New and Existing Lines of Credit

Unfortunately, much of this increased spending was not cash on the barrel head, but a return to the use of credit cards, a trend many economists and financial analysts consider potentially dangerous.

Overall, credit card limits went up by $60 billion during the second quarter of 2011. During the prior four quarters, about 199 million credit accounts were closed, but in that same period 168 million new accounts were opened. Paying down credit card balances was the primary debt reduction activity during the worst months of the Great Recession, but during the second quarter of 2011, the number of open accounts jumped by 10 million, for a total of 389 million.

This trend seems to suggest that as soon as Americans feel some safety to do so, their natural inclination is to return to the use of the little plastic cards that have been the staple of the average consumers wallet.

It is, however true, that while the increase in credit card use seems alarming, the number of open credit card accounts is actually 22% below the peak period during the second quarter of 2008. Americans have greatly curtailed their use of credit cards, but financial advisers warn against the ease with which old patterns reassert themselves. The undisciplined use of multiple credit cards by millions of Americans is unquestionably one of the factors that plunged the nation into the Great Recession, which started some time in mid- to late-2008, or even as far back as December 2007.

Even with the obvious effort on the part of individuals and families to reduce their credit card indebtedness, the existing levels mean that debt is now a factor of American life. Resolving that debt will be a long, rather than short-term proposition and any slide back into the use of easy credit can only be seen as a danger signal.

Data released in early March 2012 showed that filings for jobless benefits were back up, with the economy adding only 227,000 new jobs in February. The ratio of the liabilities held by an individual household measured against the households after-tax income, is at 117.5 percent. Thats the lowest level since 2004, meaning Americans are getting more take home pay, which, for those with jobs, is increasing their purchasing power and ability to resolve debt. It is not, however, reducing the jobless rate, which stood at 8.3% in February.

Significantly, the total number of temporary jobs increased by 42,500 for the month. Temporary jobs often indicate that companies are considering increasing their staff, and it is not uncommon for such positions to translate into permanent work — although this was not the case at the height of the recession. Additionally, manufacturing gained 31,000 jobs, a good indicator of rising production levels, which are predicated on market demands,

If new estimates are correct, and the Great Recession did begin in December 2007, the U.S. is still 5.285 million jobs under the employment level at that time, which is a staggering payroll jobs deficit. Although different in its manifestations, this financial crisis has — and continues to — change the face of American life as dramatically as the Great Depression, which began in 1921, and from which the U.S. did not begin to fully recover until its entry into World War II in 1941.

Mortgage Debt and Foreclosures Down Significantly

Between March 31 and June 30, 2011, approximately 284,000 consumers received a foreclosure notice, a drop of 22.8% over 2010. Additionally, mortgage-related borrowing was down 1.6% for the fourth quarter of 2011. New mortgages were 3.1% below 2010 levels, making the numbers the lowest since 2000. Even in the fact of interest rates that can only be termed rock bottom, the housing market has not come out of the doldrums.

For the most part, people are not buying new homes, either because they do not want the financial burden, or because they cannot qualify for the mortgage credit. Many of the people who lost their homes to foreclosure at the height of the Recession are good candidates for home ownership, but the damage done to their credit has not yet been sufficiently repaired, nor have employment figures improved enough for many of these people to risk it. Where real estate is concerned once bitten, twice shy seems the prevalent attitude.

Total Balance and its Composition 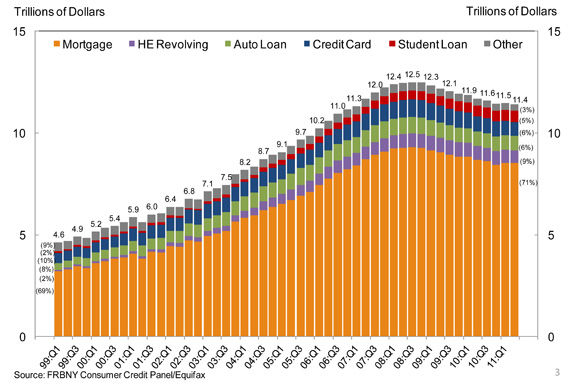 Number of Accounts by Loan Type 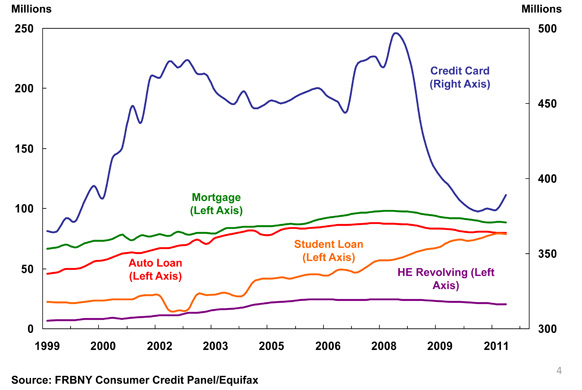 Total Number of New and Closed Accounts and Inquiries 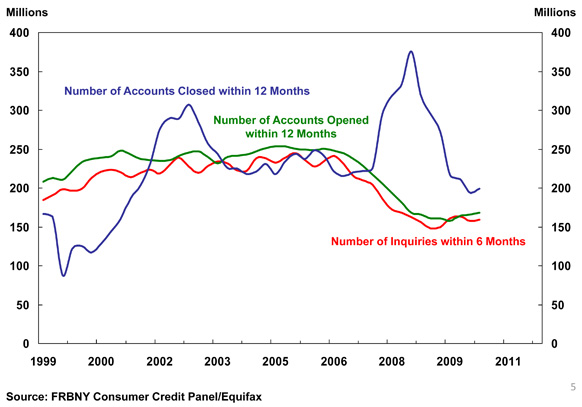 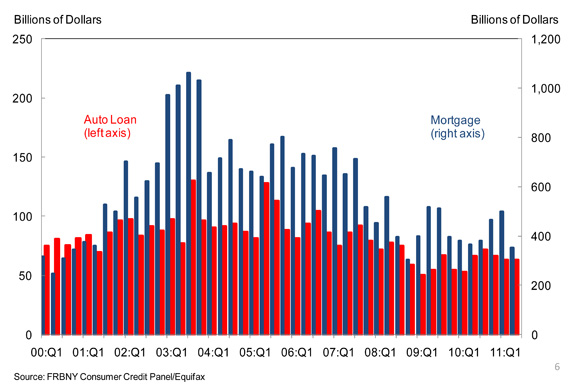 Credit Limit and Balance for Credit Cards and HE Revolving 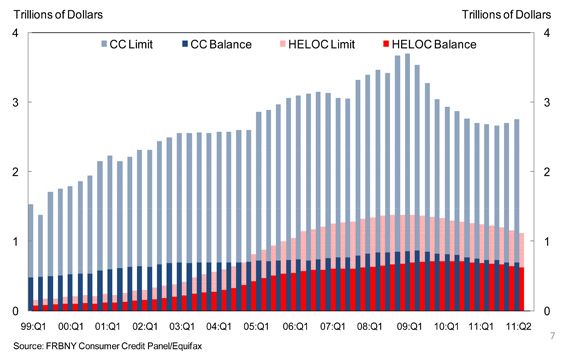 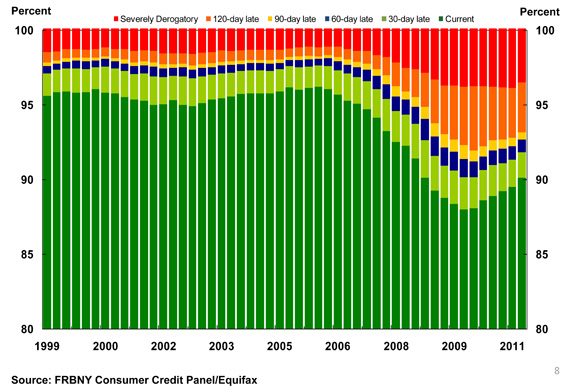 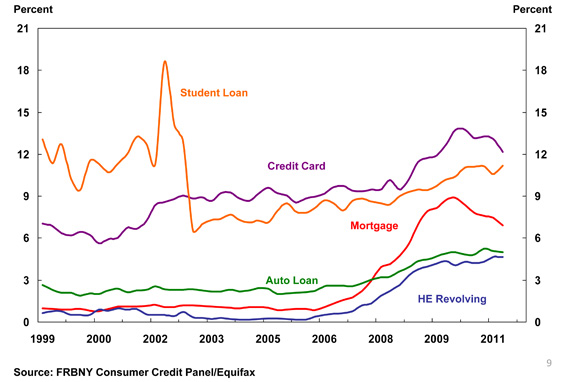 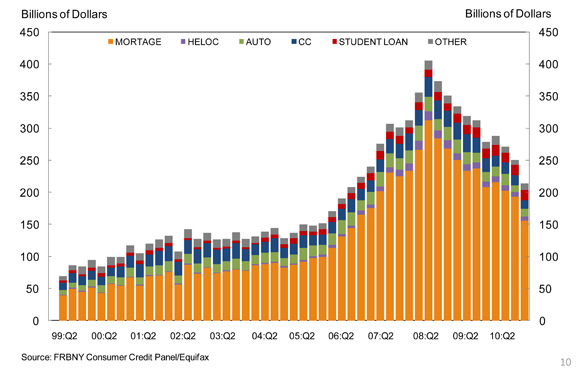 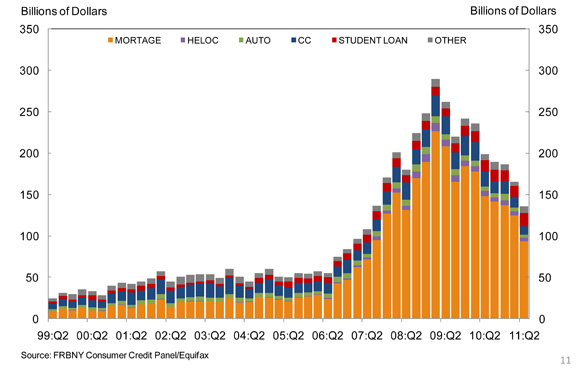 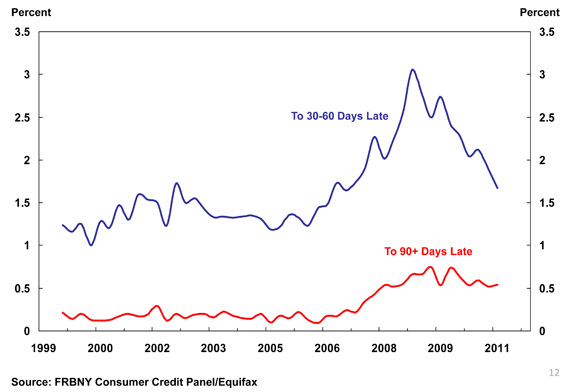 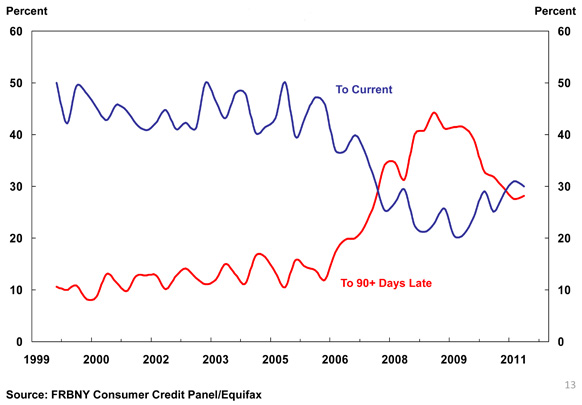 Number of Consumers with New Foreclosures and Bankruptcies 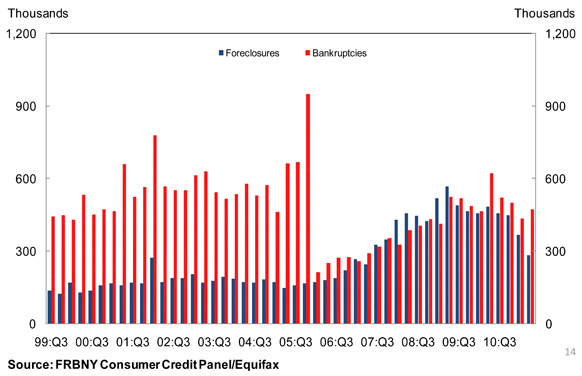 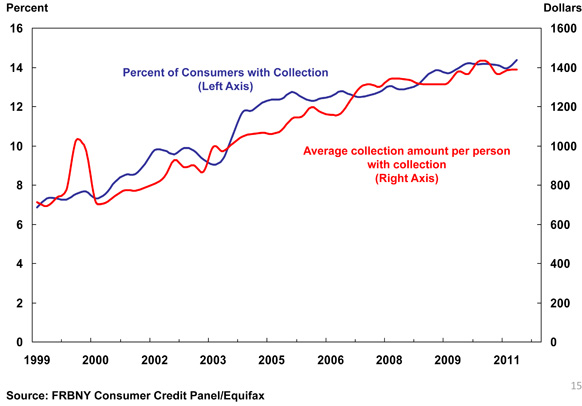 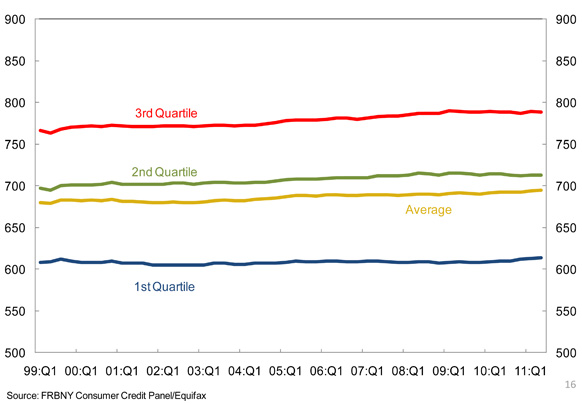 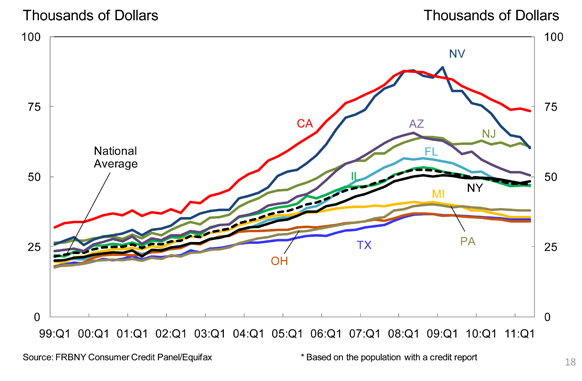 Composition of Debt Balance per Capita* by State (2011 Q2) 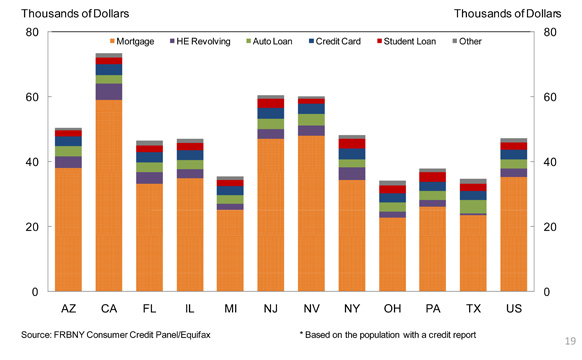 Delinquency Status of Debt Balance per Capita* by State (2011 Q2) 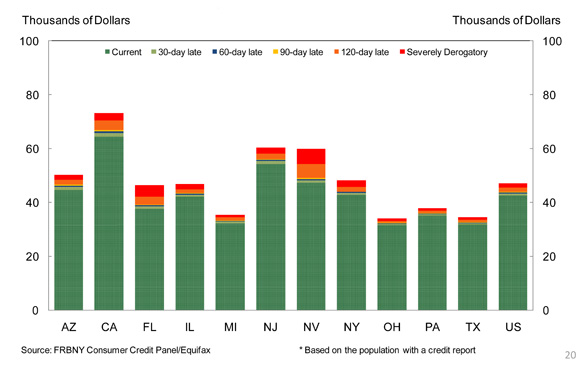 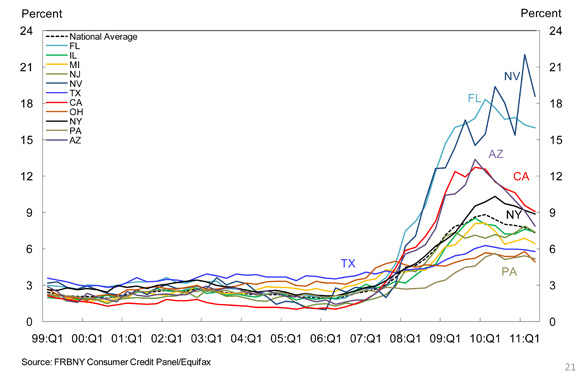 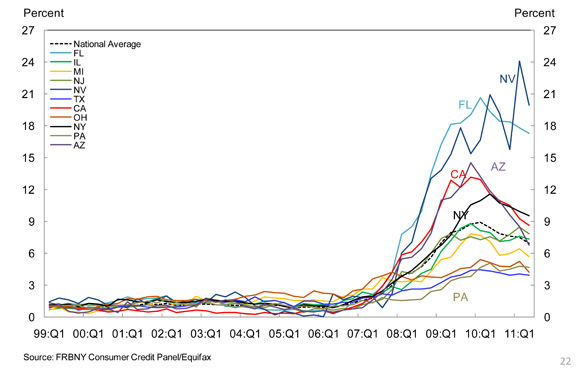 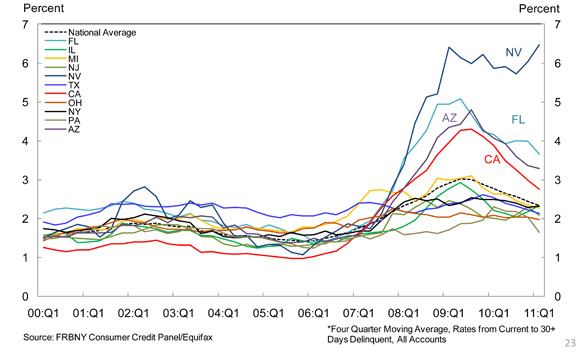 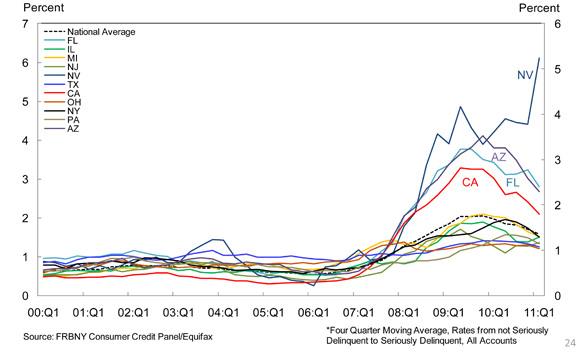 Percent of Consumers* with New Foreclosure by State 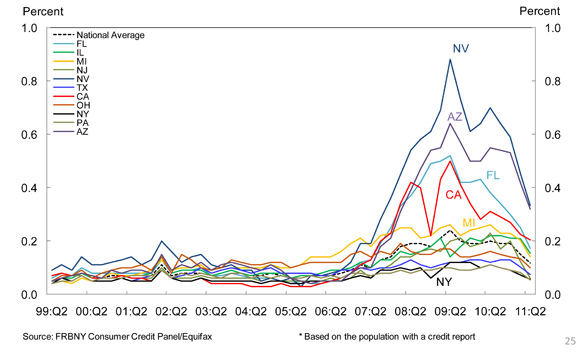 Percent of Consumers* with New Bankruptcies by State 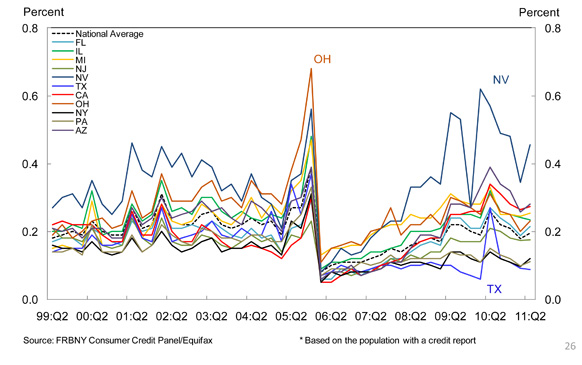